Kerala is the home to the most beautiful and incredible art forms that are legendary. Art forms talk of culture, history, traditions, man, his religion, etc. Kerala has a few art forms which are really captivating and are incredible sights.

The majestic experience of the art forms leaves viewers speechless as it not only attracts them but also makes them glued to their positions. Theyyam in Kerala is an incredible art form that takes you down the lane. Theyyam is an art form practiced only in Kerala and that too in a select part of its Northern Districts of Kannur, Kasragode, and Calicut.

Theyyam is one of the most beautiful traditional ritualistic forms of North Kerala. Kerala Theyyam is a product of the synthesis of analysis of ritual, vocal and instrumental music, dance, painting, sculpture, and also literature.

Originated in North Kerala, Theyyam is a famous ritual and art form which personifies legendary stories. Theyyam is the prominent ritual art form of the Kingdom of Cannanore aka Kolathunadu. Collaborating mime, dance, music, and dance, Theyyam unfolds the stories in the past and drags the spectators to a different world, unveiling the pasts and stories of ancient times. Theyyam is of different types and there are around 400 Theyyams, each defined with its own style, music, and choreography.

Theyyam dance incorporates dance and music with mime. Among the different varieties of Theyyams, the most famous ones are Raktha Chamundi, Muchilottu, Kari Chamundi, Bhagavathi, Gulikan, Wayanadu Kulaven, and Pottan.

The musical instruments used in this magnanimous art forms are Chenda, Kurumkuzhal, Elathalam, and Veekkuchenda. From time immemorial, dance ceremonies were done to worship the ancestral heroes and spirits. It is why Theyyam in Kerala has grown to be an inevitable part of the lives of a certain population.

ALSO SEE- 70 Best Things to do in Kerala (With Photos)

Adorned with flamboyant costumes and heavy makeup, artists have a striking look that catches the attention of the spectators. The ornaments, headgear, and choreography are majestic and strong that it creates an atmosphere of wonder, fear, and awe. With rigorous moves and sounds, certain Theyyams also include blood sacrifices. This ritual art form brings out a completely different shade of culture and beliefs. Theyyam is prominent in the northern parts of Kerala and are performed in the temples of Kasargod and Kannur. Theyyam in Kerala draws in huge crowds and the applause earned is wilder than that of a concert. But more than the applause the impact it creates on people is what is highlighting.

What makes Theyyam in Kerala remarkable

Kerala Theyyam is a ritual dance form which brings to life the great stories of the state. Theyyam is not just an art or dance form or a ritual but it is a possessed performance; the performer or the artist is processed by the spirit of God and does the unexpected and unbelievable. Once Theyyam is done, it is meant to bring peace and prosperity to the people. It is believed that calling out to God and God answering them will remove all the hazards in their lives.

It is an ancient dance form and a precursor to the more stylized and less vigorous Kathakali. Steeped in ancient history it is a wonderful mix of the ethnographic influences in the state of Kerala. The Theyyam performances are held in clan groups and all the members get their resources together and have it conducted year after year within a dwindling availability of money and the exaggerated moral responsibility of keeping the traditions alive for their ancestors and their family names.

ALSO SEE – Festivals in Kerala to visit in 2020

Theyyam talks about tales that convey messages and put forth eye-popping acts but it is not a performance for the sake of entertainment. It creates a greater reality and takes the viewers to another space. This mythological play is a wonder striking ritual that drags people from every corner of the world to Kerala.

Assuming the form of God, man appeases them and it is believed that in return for this ritual, God guarantees them prosperity and peace to the society. The communities that perform belong are Malayan, Vannan, Mavilan, Munnoottan, Velan, Pulayar, Kopalar, and Anjunnoottan, etc.

Theyyam dance is performed to worship Hindu Goddess Kali for which it is also known as ‘Kaliyattam’. The overall effect of Theyyam dance is distinctly supernatural and that is precisely the point.

Theyyam in Kerala is generally performed in front of the village shrine and does not have a particular stage or curtains; It is out in the open. The devotees and the gathering or the crowd are spread around the performance or seated in the tree nearby.

Performances of the different deities are performed for about 12 to 24 hours with certain intervals. The dancers and the drummers recite the song and there is a huge clash of colors and voices that keep the viewers glued to their positions. IT is not just a clam performance, but one with vigor and passion.

The face paintings are diverse and some of the patterns are Prazkkezhuthu, Kattaram, Vairadelam, Kottumpurikam, and Kozhipushpam. The contrasting colors and their saturation gives life to the performer. 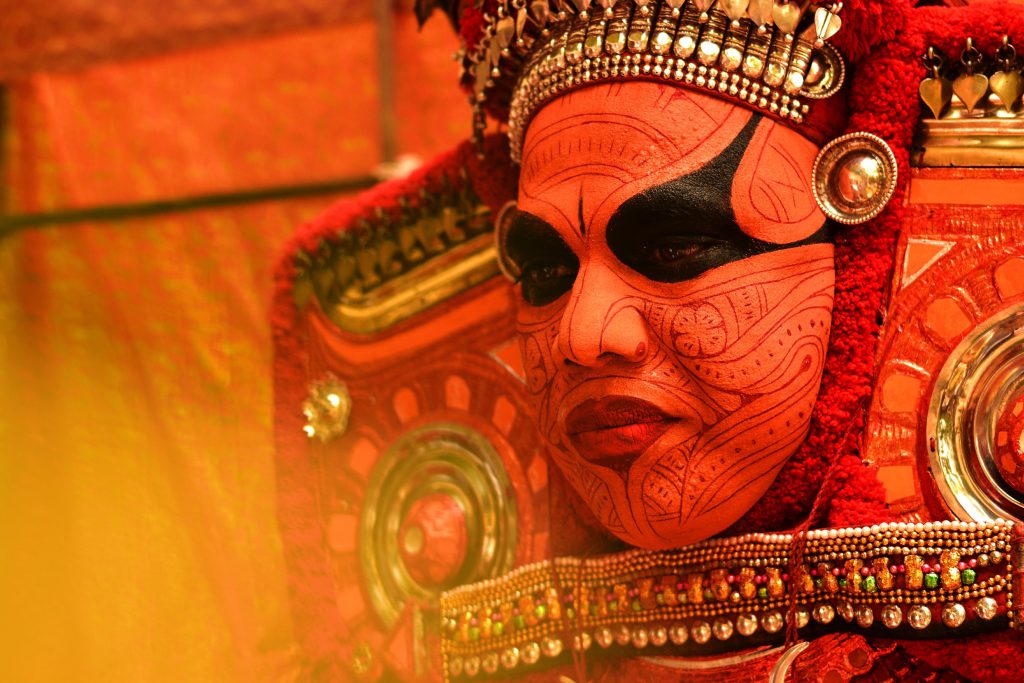 Attractions of Theyyam in Kerala

From peculiar makeup to blood sacrifices, everything about Theyyam in Kerala grabs attention and keeps viewers rooted to their positions. This ritualistic art form is not just another tourist attraction but a devoted act done to please the Gods. The ritual is believed to bring in the best of times for the devotees and that the Gods will clear them off all their hurdles and dangers.

The act is sometimes not believable to the eyes, as there are fire and bloodshed. The one possessed does the unimaginable. Jumping into the fire, hurting oneself with swords; there is a greater emotion than just a dance performance. This ritualistic art leaves the spectators spellbound and that is why it is a major attraction in North Malabar.

People from all over the world come to witness this majestic performance of Theyyam because of the cultural richness it upholds. Documentaries, movies, articles, so much have covered the importance and beauty of Theyyam. Most people have also turned their lives to this incredible performance that they have become Theyyam artists.

Ultimately it is an economic issue whether this great dance form will survive or not. The Theyyam dances are performed by distinct caste and communities and it is they who will over a period of time decide whether they would continue to perform the dances or better opportunities and employment will take them elsewhere. The Theyyam celebrations are expensive affairs and it is a tough job for the vast majority of the clans to keep it going.

Theyyam in North Kerala feasts your ears with the hypnotic chants and rhythmic drumbeats as well as your eyes with the colorful pageantry and vigorous dance moves.

Plan a trip to Kerala and never miss a chance to feast your eyes with the divine splendor of Theyyam performance and fill your soul with divinity.