Kerala is one of the top tourist destinations in the country. Tourists visiting the state will have a varied and enriching experience. Visitors can enjoy festivals dedicated to villages deities in villages across the state. The festivals are usually post-harvest festivals that provide a welcome break from the daily grind. They vary in scale and importance from a small gathering to a grand scale. Thrissur Pooram festival is one of the most important festivals in the state Malayalees celebrate the Thrissur Pooram Festival in Thekkinkadu Maidan, Thrissur.

The Thrissur Pooram Festival is an annual festival is held in Thrissur, Kerala India. Organized at the Vadakunathan Temple in Thrissur on the Pooram day. Pooram day is the day when the moon rises with the Pooram star in the Malayam calendar of Medam. It is the largest and most famous of all Poorams. Magnificent elephants, dazzling parasols, and music are an integral part of the festival. It is a fantastic display of the spiritual and cultural spirit of Kerala. 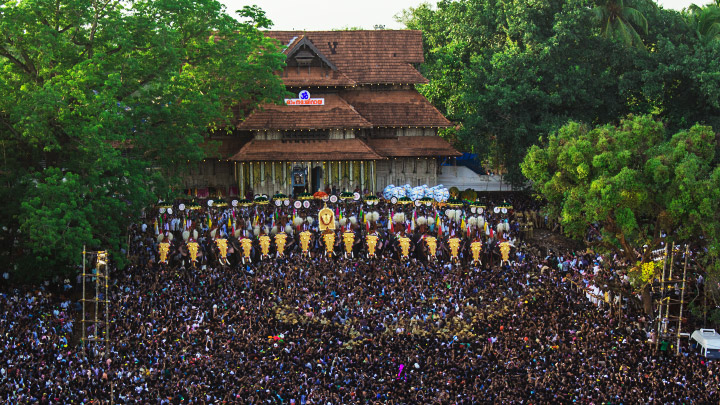 It is an important festival of Thrissur and its hinterland. People all over Kerala congregate at Thrissur to pray to Lord Shiva. Visitors can witness huge processions, with music and prayer.

A unique feature of the Thrissur Pooram Festival, everything is made from scratch. People meticulously craft umbrellas and nettipattam.

Another unique feature of the festival is the ilanjithara melam, a mesmerizing performance by 250 artists. Led by Cheda artists the orchestra plays soul-stirring music while spectators wave their hands in rhythm to the traditional music. The musicians play the chenda, kurumkuzhal, kombu, and elathalam (traditional instruments of Kerala). Visitors can view a grand fireworks show.

Historians trace back the origins of the Thrissur Pooram festival 1798, through a royal proclamation by Raja Rama Varma. The king was popularly known as Shakthan Thampuran, from the princely state of Cochin.

Before the Thrissur Pooram festival, the largest temple festival in Kerala was at Aarattupuzha. Temples around Thrissur participated in the Aarattupuzha Pooram festival. The authorities denied access to Thrissur temples during the parade because they arrived late. The temples felt humiliated by the exclusion and approached Shakthan Thampuran.

Two groups are participating in the festival – the Paramekku side and Thiruvambady side. There are two principal participants, Paramekkaku Bhagavathi Temple and Thiruvambadi Sri Krishna Temple.

The Vadakkunnathan Temple plays a central role during the festival. The temples send processions to pay obeisance to the Shiva, the presiding temple.

Poora Vilambharam is a custom where an elephant push opens the southern entrance gate of the Vadakunathan Temple, with the idol of ‘Neithilakkavilamma’ atop it.

The first round of fireworks or Sample Vedikettu occurs on the fourth day after the flag of the Pooram. Thiruvambady and Paramekkavu Devaswoms present the hour-long firework display. The firework display uses innovative patterns and different fireworks.

Elephants are decorated with golden ornaments, ornamental fans made up from peacock feathers, royal fans, sacred bells, and ornate umbrellas. Thiruvambadi and Paramekkavu Davaswom prepay the elaborate displays every year. Visitors can enjoy the magnificent elephants on the fourth and fifth days.

The pooram starts early in the morning. One of the main events at the festival is the “Madathil varavu” where 200 artists take part with traditional instruments.

As visitors to the festival increase, the organizers are looking for new ways to add variety to the show without destroying the essence.

At the end of pooram, both groups enter the temple through the western gate and leave through the southern gate. The two groups compete and exchange colourful umbrellas in a ceremony called Kudamattom. All the poorams conclude at Nilapaduthra.

The seventh day of the festival is “Pakal Pooram” is the last day of the festival. People of the city show their hospitality during the festivities. The farewell ceremony is held at Swaraj Round. Idols return to their location at Thiruvambadi Sri Krishna Temple and Paramekkavu Bhagavathy Temple after the celebration. The Thrissur Pooram Festivals end with a firework display.

You can visit the Thrissur Pooram festival from anywhere in the country by air or rail. The nearest airport is Cochin International Airport, about 58 km from Thrissur. The nearest railway station is at Thrissur.

The Thrissur Pooram festival is held in the Malayam month of Medom (April-May). In 2021 festivities were scaled down because of the Covid-19 pandemic. The public was not allowed to participate this year, but the temple authorities conducted all rituals as per regulations.

Festivities on the main day begin with the arrival of poorams from eight temples. The first poorams begin at 6.30 in the morning.