These are shore operated lift nets operated by a group of fishermen in Kochi, Vypeen and Cherai in Kerala and is a symbol of Kochi as a prominent place among honeymoon spots in Kerala.People usually have a lot of expectations of this place when they visit Kerala and are always curious about Chinese Fishing Nets.

A Chinese explorer Zheng He introduced Chinese Fishing Nets to Kochi when there was a trade between Malabar and China in 13th century. Chinese explorers brought an creative shore operated lift nets system few centuries back. It’s an extremely cingenuous fishing technique that enables few fishermen to operate a huge 20-meters-wide fishing net alone using a cantilever with an outstretched net pulled from the non sea facing side by people. This fishing net system is simple enough to operate without any training. One just has to walk on these net structure to make the nets sink into the water. His weight is enough to submerge the nets in the water and when nets come up the same will be filled with fish.

ALSO SEE- Is Kochi and Cochin the Same?

The height of Fort Kochi Fishing Nets varies along with different nets. The minimum height among these nets is approximately 10 meters. The level of depth also varies from one net to the other. The visit to these shore operated lift nets is very splendid, and it stands among the buildings in modern Kochi near the shore as a symbol of influence from Chinese who used to trade in Kochi many years ago. 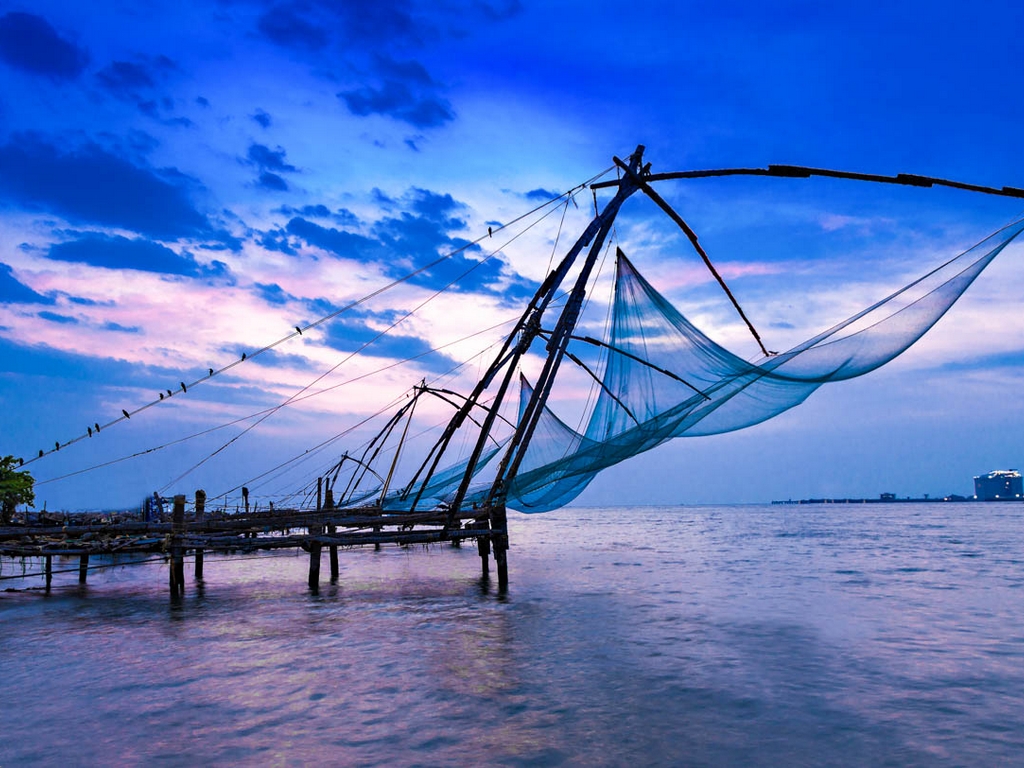 This net system is a well-balanced system. Gigantic fishing nets are counter weighed by some massive hanging stones on the opposite side.

The entry cost for visiting Chinese fishing Nets in Cochin is Rs 0.

It is a free tourist attraction by the roadside near Fort Kochi Jetty.

How to fish with Chinese Fishing Nets Kochi

Some describe it as the most non-violent form of fishing; anglers expect fish to swim into their immersed net, before they can lift up the catch. The net, hung on spindles from a cantilever and dropped into the estuary/lake, stays submerged till the fishermen are sure that enough fish have landed. Then, the net is lifted, trapping the unsuspecting fish.Each installation is operated by a team of up to six fishermen or four fishermen. Think of a place where one can see fish caught in front of their very eyes. The fishermen catch fishes and sell them to the vendors. Baby Fishes can be witnessed moving on the stand.

ALSO SEE- 15 Items to buy from Kerala as a souvenir

There are two types of nets — those operated by six people and those operated by four. Their number has come down over the years and unless we take urgent steps, they may lose their character and also their original purpose.The private owners of the nets, which are still being used to catch fish, had been reinforcing them every decade or so, making them stronger and larger losing the traditional style. A few of the fishing nets have iron pipes in place of the original teak wood, much to the consternation of heritage lovers in Kochi. About 165 people in Fort Kochi earn a livelihood with the help of these nets which are also there in Vypeen and Cherai.

When authorities deepened the channel for the Vallarpadam container terminal, the catch of fish through Chinese fishing nets was reduced and unless steps are taken to preserve the nets and help the fishermen, the tradition may die down and one of the major attractions in the many moods of Fort kochi may die down.

What to expect from Chinese Fishing Nets?

Most people usually don’t have a splendid experience at the Fort Cochin area because their expectations are of a beautiful tourist attraction in between quiet places but facing sea. However what they see is Chinese Fishing Nets in between modern buildings and Fort Kochi. The view of the nearby areas of Chinese nets is a wave of disappointment to the high waves of hope of adventure and fun at the Fort Kochi. In fact, for many people, encounters with local people in less populated areas are far more interesting than the visit to the fort.

If you want to visit the Chinese fishing nets anyways, do prefer sunset time or sunrise time when the Chinese Fishing Nets will be a great backdrop for images. You’ll get lovely pictures and won’t be able to notice the litter everywhere.

The surrounding area of the Chinese fishing nets is full of vendors trying to kind of harass you to make you buy things from them. Around the Chinese Fishing Nets, you will be offered plenty of things to buy, from typical handbags and jewelry to a plastic pasta maker and other local crafts which are not found anywhere else in Kerala.

ALSO SEE- 15 Items to buy from Kerala as a souvenir

However if you are planning to visit Chinese Fishing Nets and is travelling along, you need to be careful about the tourist traps. If you come closer to the Chinese fishing nets, you will find fishermen so nicely offering you to come closer, make their videos operating a Chinese fishing net that it’s almost impossible for you to deny. They will fully explain the procedure from sinking the net to pulling the net out with fishes in it.

And if they are bad at catching, they will explain that they are out of form as they aren’t catching much these days. Once they become friendly, some of them may ask you for help. Clearly, some of these are fishermen who aren’t fishing anymore rather make their money by putting this kind of “show” in front of the tourists.

Have you ever visited the Chinese fishing nets in Kochi at another time?